Paul Mortimer’s degree show for the OCA was at the Dundas Art Gallery in Edinburgh.     He describes Land Values as his photographic investigation of how important land is in your life. The exhibition consists of three parts:

Engagement and play is a fascinating look at Mortimer’s own environment, comparing an area in Yorkshire where he grew up with the part of Glasgow he now lives in. Mortimer asks the question- are there similar places to play and grow in as a child nowadays to those he found in his own youth? His answer seems to be no – but why? In a conversation about this with Paul we wondered at length whether it was because of the lack of perceived safety outside at present, or was it because what was wanted now by young people was more ‘sophisticated‘ than the activities we engaged in as children.

Transformation and conservation looks at the coastal area between Hartlepool and Sunderland where a piece of land that was used by the coal industry and heavily exploited has now been allowed to regenerate and is used for the almost opposite causes of recreation and tourism. The land still shows the traces of what was there before in the form of piers and fences, but is gradually returning to its natural state. These images are stunning, vibrantly coloured and reminiscent of the work of Fay Godwin and Sirkka-Liisa Konttinen.

Environmental contribution looks at the role of trees in our present urban areas, these were taken within the grounds of a hospital within the city of Edinburgh and show some stunning examples of trees against the somewhat incongruous signs in the area. The site is being considered for redevelopment, at present the grounds form an informal park for the local people and are taken for granted. Will this change with the changing use of the site? Mortimer hopes to be able to continue this project as the site changes its use and to follow the environmental changes here.

This is an interesting tripartite look at how we engage with the land. Do we value it for what use it is to us – or does land have an intrinsic value, that is more than just its monetary worth? Why do we go to places? How does memory effect what our understanding of a new place is and our visions for the future?

This image is from the series ‘The Coal Coast’ by Sirkka-Liisa Konttinen. It was originally shown at the Baltic Centre for Contemporary Art in 2003, and published in book format as ‘The Coal Coast’. The image is taken on the east coast of England, in Durham, and shows a discarded section of mine duct on the beach, looking remarkably like an enormous snail shell. The rest of the beach is desolate and deserted. The Durham coast has had a long history of coal mining, and for many years the spoil heaps and the rubbish were simply dropped onto the beach, building the surface up several feet above its original level. The coal industry is now finished and the remnants on the beach are slowly being removed by both man and the sea. The broken mine duct stands as a metaphor for the destruction of the environment by man and the loss of a way of life. It is still visible, as it is both large and a good distance from the edge of the sea, however, over time, it too will vanish.

This image immediately reminded me of the similar history of mining along the Fife coast where I live. Much environmental destruction was wrought over the years, however the traces of that are now only visible to those who are aware of the history of the area and know what they are looking at. My image is made as a response partly to the internal context of the image – unexpected things seen on the beach, but mainly to the external context of the history of the area and the effect on the local population and job availability.

This image shows remnants of the broken down mine washrooms, that were left on the beach. The tide is high and gradually working at smoothing and polishing them. Eventually they will also disappear, or simply become unrecognisable. They stand, at present, as a reminder of times past, work lost, and also the loss of many lives in the mines that ran under the sea here. 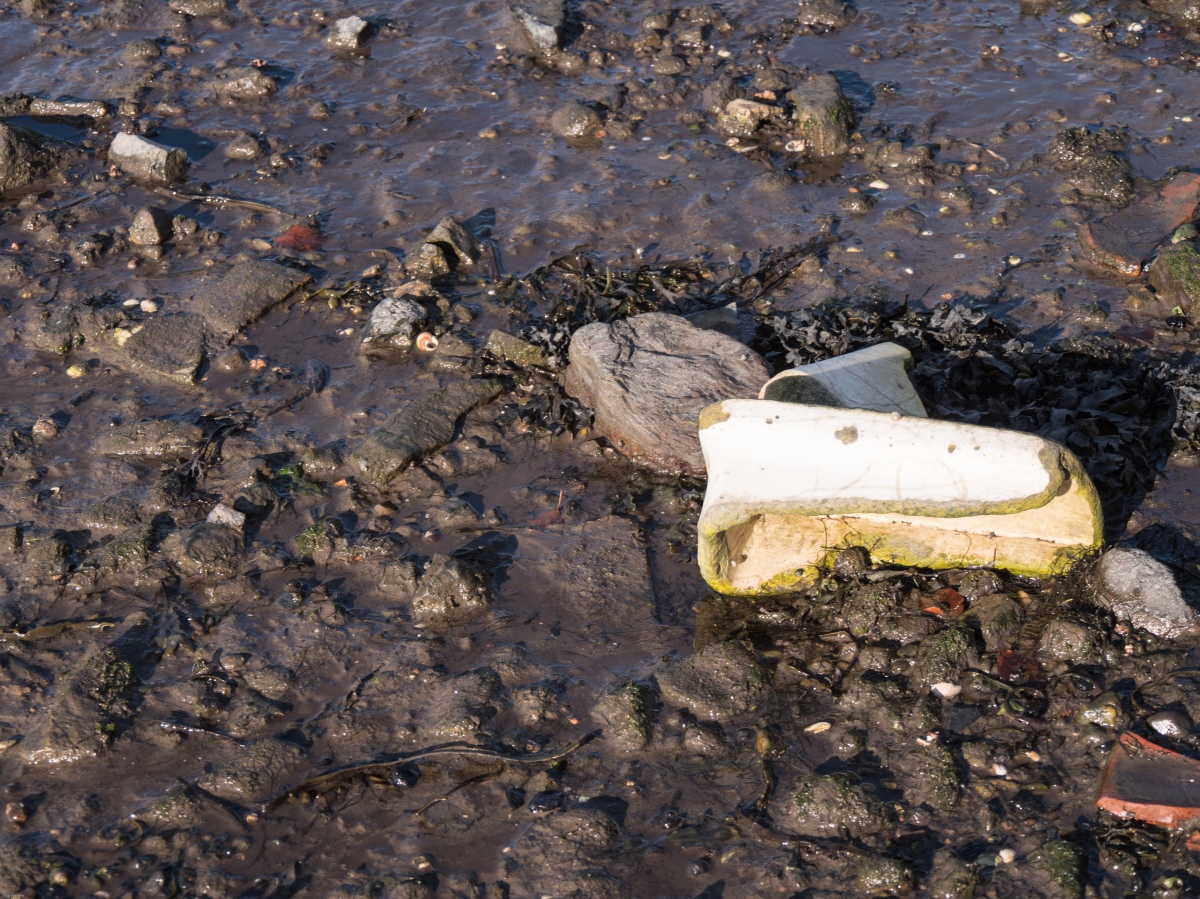 While thinking about an image to use for Exercise 5.2 (homage) I went back over several of the exhibitions I had visited recently. When looking at the images, one by Sirkka-Liisa Konttinen from the Coal Coast series struck me and I remembered that there is some unusual debris on part of the coast in Fife near Torryburn. Oddly enough, there is the usual beach flotsam and jetsam but there is also a stretch of about 200 metres of coast that is strewn with old bricks and sanitary-ware (broken up large pieces of ceramic sinks).  The local mythology – which I haven’t been able to confirm – is that it comes from the destroyed wash-houses of one of the local pits, and was put on the beach at that point to stop erosion. There is no logic to why the erosion should be particularly bad just there, and I suspect the truth is that it was just dumped, although that is odd in itself, as there is no road nearby and the shore is very gradually shelving for at least a hundred metres, so you couldn’t get a boat large enough to bring the rubble in close enough.

I felt that there was a possibility of doing my homage shot on the beach as there are several possible links with the image I was thinking of, so I went back over both the exhibition images as a whole and re-thought about it and the accompanying film which I have discussed in more detail in the blog post below.

Coal mining in Fife has a long tradition, with coal having been dug since the thirteenth century and the Fife coalfields were the largest in Scotland. Many ran under the Forth and were very deep. The nearest pit to this stretch of coast would have been the Valleyfield pit which closed in 1978. There is little surface evidence left of this extensive underground industry except the occasional pit-head and the endless bings (spoil heaps). The last deep coal mine at Longannet, which stretched well under the Firth of Forth was closed in 2002 after flooding. There continue to be ongoing attempts at open-cast mining, which scar the countryside and cause aggressive debate.

I have been to this beach on many occasions, and also to the pit-head further along the coast at the Seafield Colliery however have never taken any images of the debris, so I went back this weekend at high tide, and again at low tide to look at the area and the surrounding coast.

The chimney in the distance is part of Longannet power station, which is now disused. At low tide the mud flats stretch out for about a hundred metres, although I would not advise walking on them, as the tide can come in extremely fast, and much of it forms quicksand.

There is a wide variety of wildflowers and bushes along the edge of the coast here and they attract thousands of birds, many of which are protected species. 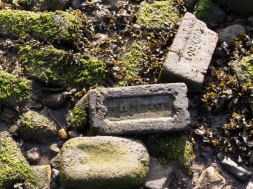 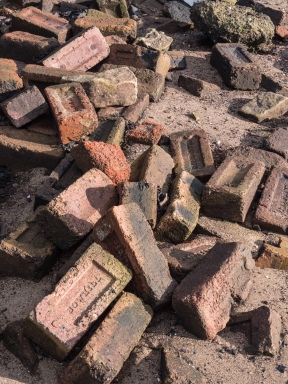 Part of the rubble is made up of bricks that come from the local brickworks and are stamped with the source name: Lochgelly, Bowhill, Hill of Beath, Lochside. More evidence of an industrial past now gone. 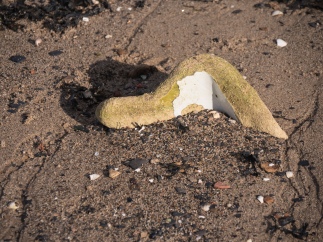 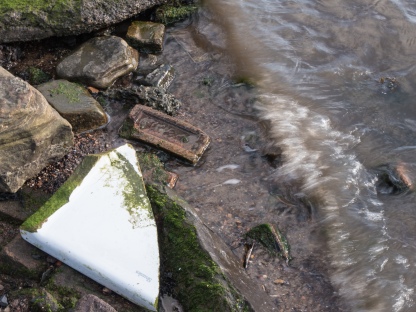 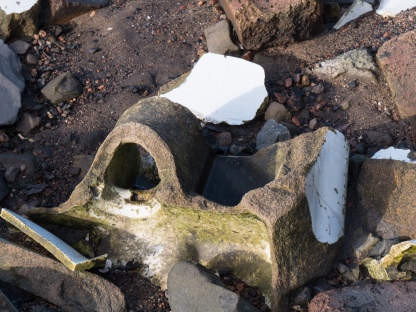 It remains a mystery as to how the sanitary-ware reached this spot – and why in such a localised and inaccessible (except by foot) point. 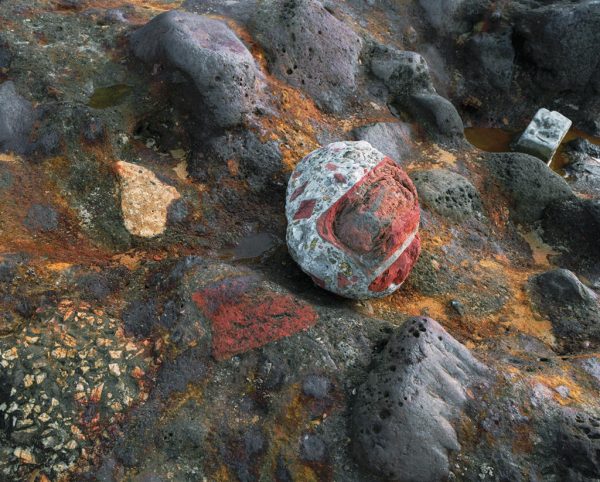 The Coal Coast is a body of work by Sirkka-Liisa Konttinen about the effect of the coal industry on the beaches of Durham. It was initially shown at the Baltic Centre for Contemporary Art in 2003, and developed further along with a film and shown again this year at the Side Gallery in Newcastle.

Images from that collection are available at:

and there is a talk that was given at the opening of the Side exhibition available at:

Sirkka-Liisa Konttinen is a Finnish photographer who has worked in Britain since the 1960s. Her earlier work was all in black and white, mainly on the lives of people in the Newcastle area, however, she branched into colour for this series, using a medium format camera with colour negative film.

The Coal Coast describes the effect the coal mining industry has had on the environment. All the waste from it was simply dumped on the beaches, together with the ballast from the ships and the ash from the coal that had been burnt to provide energy for the operation. This effectively raised the levels of the beaches by several feet. Since the coal mining has stopped there has been an attempt to clean up the beaches, and the effect of removing some of the debris and letting the sea have more access has further removed some of it. Sirkka-Liisa Konttinen says ‘a redeeming thing is that the sea is taking back the man-made intrusion …. Maybe environmentally it will return’ and also describes how these sea changes impacted on her work, in that there were constant changes to the beach, how she would look for the time of day, light and tide combination that would show what she was interested in only, on some occasions, to return, and discover that the items had been washed away.

The images are often bleak: a dead bird, mine rubbish, a shoe half buried in the sand, but full of the most surprising colours, rust red, copper green with the intense blue of the sky. It is clear why she chose to use colour rather than monochrome to show this area. The series acts as a comment on the destructive powers of industry on nature, but also on the regeneration possible. The images themselves are sparse, definitely less is more, and benefit from repeated viewing. Some are reminiscent of the images of famous tourist areas, sea, sand and rock formations, so knowing the background to the images is crucial to understanding them.

The recent exhibition was accompanied by a film made by Sirkka-Liisa Konttinen and the Amber Collective, which is accompanied by music from the New York group So Percussion. It tells the story of a young miner, Billy, who died in the pits and the struggle to get his body out, interspersed with the images from the Coal Coast series and scenes of the moving waves, with sounds of the sea on the beach. It is both heart breaking and beautiful. The story is narrated by a former colleague of Billy, and even at this distance in time, the emotion in his voice is clear. The repeating and echoing music weaves in and out of the rushing of the waves. Overall a cathartic experience.