Brief: Use a combination of quality, contrast and direction of light to light an object to reveal its natural form.

I spent some time experimenting with this. I chose to use a simple and quite weathered shell, placed on a black piece of cloth. I used a variety of lighting:

and tried these out in a variety of combinations. The camera was set on a tripod and I used a remote trigger to allow for the increased time. I focused manually, but saw when examining the images that the focus was not always on the most interesting area of the shell. This would be worth revisiting using a greater depth of field.

I ended up with 14 variants on my first trial:

Out of these the ones that I thought most interesting were the ones with the point light, they dis not show as much detail of the whole shell as those with a more intense light such as the natural light with added flash, but seemed to have the potential to give more sense of the shape of the shell – so I went and experimented further. I used mainly a single point light from various angles , and then added in a second softer light to cut down some of the shadow.

My overall favourite image is the top right of these using 2 lights with the inside of the shell lit up, and  a slightly softer shadow.

It would be worth experimenting further with flash bounced off a reflector.

This exercise is about thinking and noting the difficulties in getting a ‘new’ vision of anything or anywhere.

This shows a Google screenshot of Mount Fuji – classic images, all very similar 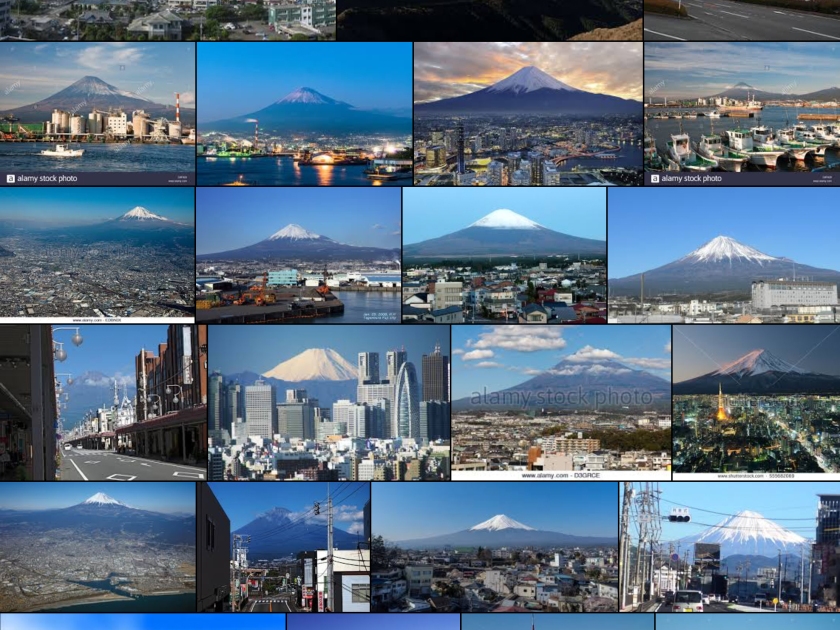 In the whole series of images by John Davies on Fuji City the mountain is either absent or only minimally present. There is no ‘traditional’ shot with blossom and snow in sight. These are not pretty, but striking and much more evocative of what Fuji City is likely to be like in modern day Japan (Fuji City, 2008). The series by Steele-Perkins on Fuji City is very different, more personal with people and close incidents, e.g. a person struggling to walk in the snow. Again, the mountain is relegated to the background (Steele-Perkins, 2002 ).

If you Google images of Dunfermline (my local town) there is the same effect, most of the images show the Abbey, which while attractive and a tourist destination, tells you very little about the town itself, or the lives of the people there.

So – how do you see something in a unique way? Do you spend a long time looking (as suggested by Haas and Bailey)? Do you let the camera see (Bill Brandt)? This is about developing one’s own style and way of thinking. If I look at most of the images in my collection, they probably do not say much about me and my personal thought process.

There is a further complication if you are looking at many images, such as when studying photography. There is an instinctive temptation to follow what has already been done. When thinking about still life – I automatically think of the peppers and shells photographed by Weston.