This exercise took me a lot longer and was much more frustrating than I expected it to be, mostly because of camera issues.

The first set of images were easy to take. I used the ‘intelligent’ auto setting. As my midtone was tan coloured I changed them all to monochrome to make the point more obvious. The images are almost identical except where the camera has picked up minimal differences in shading.

I then went on to the manual pictures. The first problem I had was that my camera had set itself back to auto ISO, so kept making compensations in the ISO. the next issue was that my camera showed the histogram as it thought the scene was, so persisted in keeping it in the middle range even when I changed either exposure or aperture. This left me guessing wildly as to the amount of exposure compensation to use, and I kept getting it wrong. I generally guessed much more than it actually was. I eventually gave up, and found the camera manual and from there found a way to alter what the histogram showed so that it showed what my setting would give. That made it much easier, and it will be left like that. I had rarely used full manual before, and this was not an issue in aperture or shutter modes.

There is now a very clear difference between the images.  What I should have done was looked at either the shutter speed or the aperture in the auto images and kept this identical in the manual images as this would have made the amount of change in the settings clearer.  By the time I realised this there was a significant change in the light (the sun had come out) so the settings would have been altered by another factor. 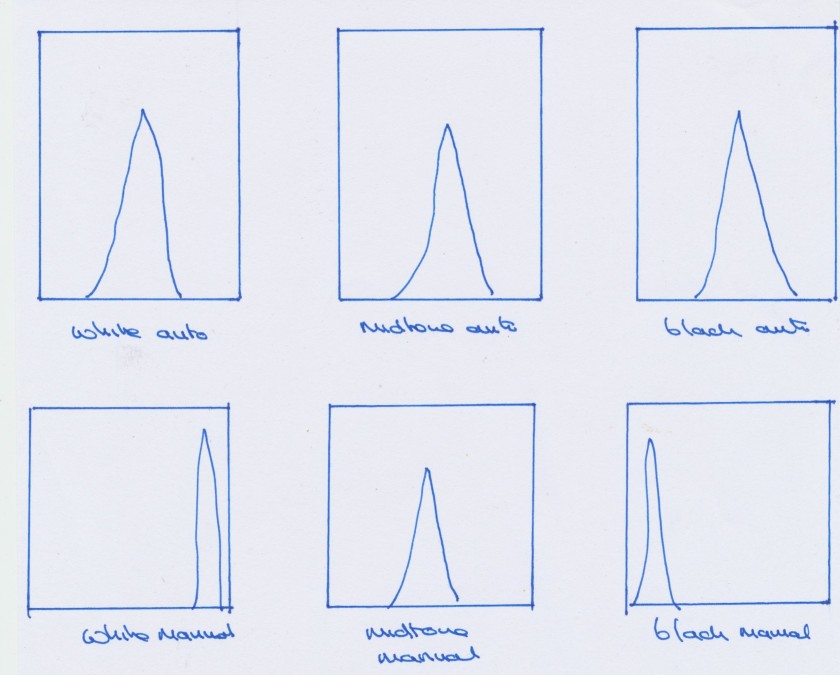 The histograms (once I had altered the camera settings) show a clear difference, as do the ones that show on Lightroom.

The way a camera automatically measures light is something I was already aware of and was very pertinent to a recent day out. I was at an old prisoner-of-war camp. The day was mainly overcast but bright so there was a lot of very white cloudy sky, and the buildings were mainly dark. I could either expose for the sky, leaving me with too dark ground or vice versa. I opted for a middle way, shooting in RAW, and then altered the images in Lightroom, as even doing that the sky often ended up very white. The range of light was not coped with well by the camera’s meter, and was one of the occasions an incident light meter would have been helpful.

This wasn’t my ‘best’ shot of the day but it dramatically demonstrates the problem, and also the changes that can be made in post-processing.