Brief: Take a sequence of shots over a day, getting a good range of times. Examine the quality of light. Add shots to learning log with an explanation and thoughts.

I decided to take the images in my back garden. This was to allow me to take a range of shots over the day from the same viewpoint, and also to look for any areas that were lit up well at any specific time of day. I choose last Saturday when I was in most of the day and initially the day seemed promising, with a good weather forecast and an interesting light. Unfortunately as it developed it clouded over and the majority of the day was heavily overcast, with some rain showers and only a brief, startling, glimpse of sunlight. I decided to take the images at 2 hourly intervals from sunrise to sunset. I had to be out at the midpoint, however, have substituted in images taken today when the weather conditions are very similar. I chose to take images of:

Plan of Images with direction of shot marked. 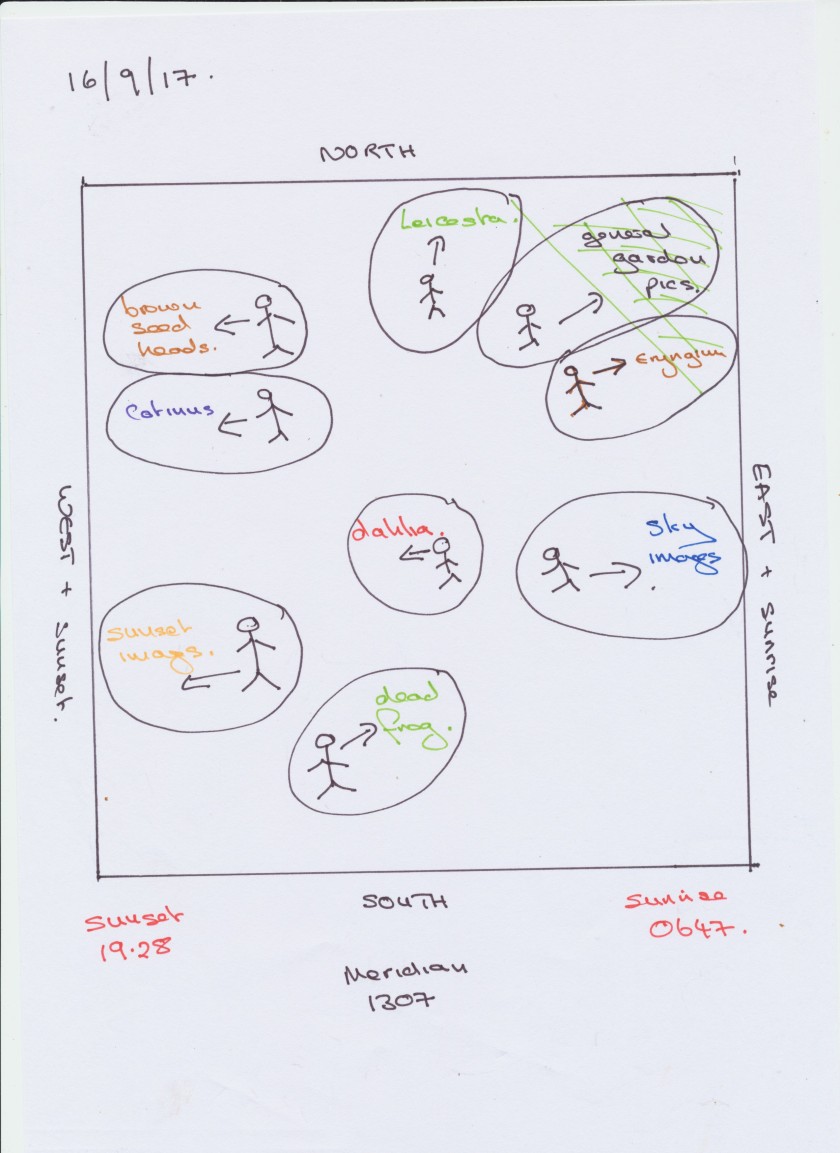 All images were taken with the camera set to manual, with settings based on the internal lightmeter and histogram. I took brief notes throughout the day. In this instance I am posting the images with metadata to show how much the light intensity varied throughout the day. I have not changed the white balance at all in processing.

The sun was only just coming up. The light was very pale and still quite grey. My eyes interpreted it as  a reasonable degree of light, I was seeing in colour, and walking outside easily so I was surprised at the amount I had to open up the camera settings to take the images. If I had been guessing I would have completely underexposed the images. The image of the flower bed is still quite blue in spite of the early hour (no hint of gold yet).

It was now completely clouded over with no shadows at all. The light was very flat, but on looking at the images definitely showing a much warmer tinge than the earlier images. I thought this would give some interesting details images, as not confused by excess shadow. I feel this worked well with the plant (Eryngium). The (slightly gory) dead frog could probably have benefitted from shadow to give a more 3-dimensional effect.

The light is now fairly constant, very similar to 2 hours previously according to the camera, although my eyes had thought it was lighter, but grayer. It remains neutral and the flower head close-ups are successful and clear. The two flower images are at an identical exposure even though they were taken at opposite sides of the garden. The light is coming from nearly overhead and is very diffuse because of the dense cloud cover.

The sun is now at the meridian, that is, as close to overhead as you get in Scotland in September. It is still very cloudy with a diffuse light. The slightly warm tinge of the earlier images has completely gone. The images look very flat but maintain a good level of detail which is brought out in the monochrome conversion. The bright green leaves (Leicestra) show well, but the red flowers are less sucessful.

Still very cloudy and a diffuse light but the flowers from the corner are needing considerably more exposure than the Dahlia in the centre of the garden where there is no restriction to the light. There was no obvious change to my eye!

And it has suddenly done very sunny (only lasted about 30 minutes). A complete change of light. The light is now quite harsh and very directional. I deliberately left in the shadow of me taking the garden image to show how sharp edged and dense the shadows were.  The light is starting to turn more golden again. It has moved around to the west so the Eryngium (spiky flower) is in full sun and difficult to pick out against the background leaves.  All the detail of the plants has been blended together by the brightness. This is not a good use of this beautiful light.

The sun has gone into the clouds again, but is definitely going down. there is a definite redness in the sky. The light is very diffuse, and not as golden on the plants as I would have expected, but gives an interesting effect looking though the leaves of the Cotinus ‘Royal Purple’. There is good detail back in the Eryngium as it is no longer in harsh sunlight.

The daylight has virtually gone and the settings are very similar to the first ones of the day. The light quality is still diffuse, the golden tinge of earlier has almost gone, Oddly enough the sunset in the west mirrors the sunrise in the east.

Notes as taken on day: 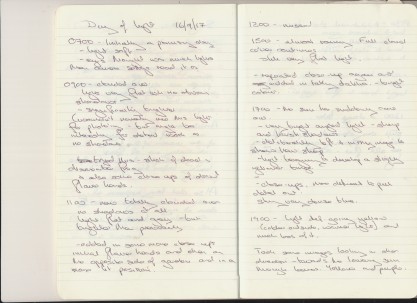