Using a method inspired by the example above record a trace of movement within the frame.

I found this exercise both interesting and frustrating. After reading about it I remembered some images of fairground rides I had taken some years ago using a slow shutter speed to show movement and had planned to repeat the exercise and see what happened. Unfortunately, despite it being summer, and visiting a number of events I did not find any fairground attractions. I have three of the original images below to show the effect I was after. The intensity of colour and the movement blur really emphasised the excitement of the fair.

The nearest I got to repeating it was the image of the big wheel below, but it wasn’t really moving fast enough to show a good blur. This would have been more successful if I had been able to take the image at night with blurred lights. This was taken at a shutter speed of 1/8th sec handheld, and even then was very overexposed and had to be significantly modified in Lightroom. A much longer exposure might have worked with the aid of a tripod. 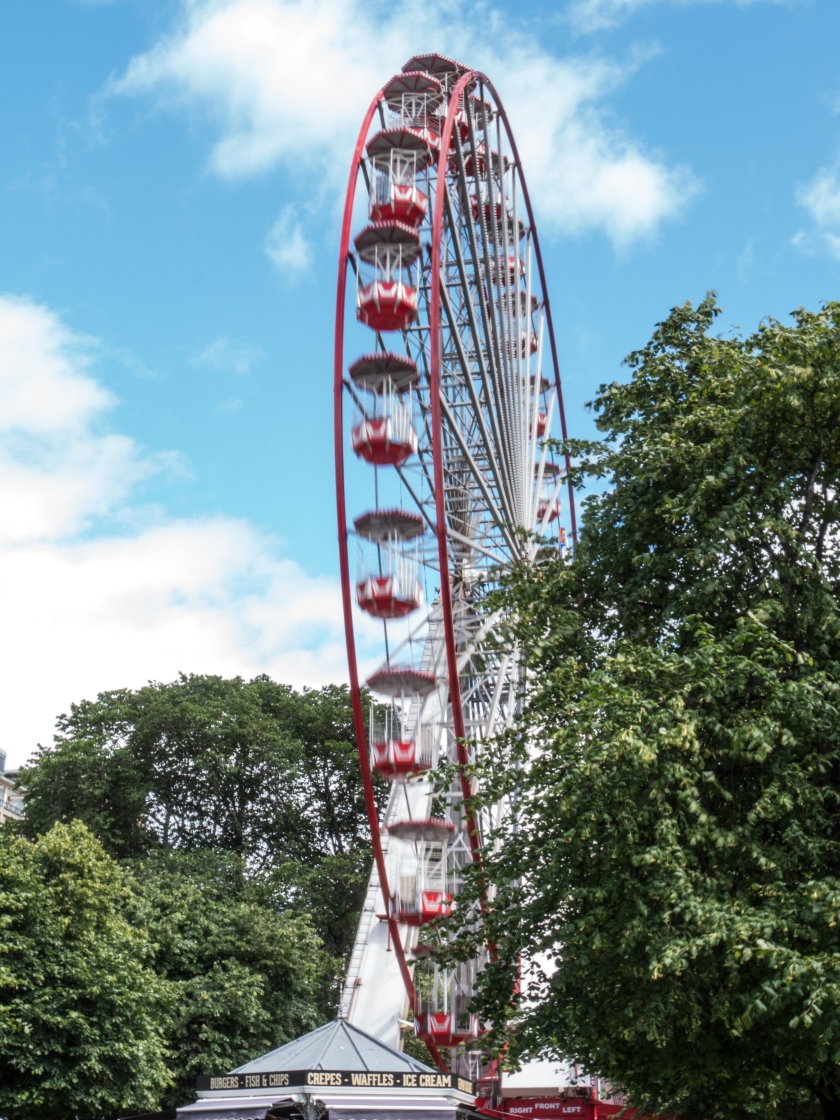 Another image type I have played with in the past is night shots, either using a long exposure time and relying on the movement of vehicle to give trails of light or by moving the camera and thus causing the light trails artificially. I thought about replicating these but decided to just show some of the original images to give the idea.

I then decided to try to show the rush and thrust of a busy place, using a slow speed to emphasise the movement of the people. I experimented with this on Princes Street in Edinburgh at about lunchtime and also in Waverly Station.

I liked these images as I feel they give an idea of the pushing and hurry of trying to cross a street. Interestingly I found that I was automatically trying to follow the people while they were moving and had several images where the people were sharp but the background blurred, which was not the image I was aiming for.  I really need to go back with a tripod and try and retake these, although it will be difficult to find somewhere to set up a tripod where I can both see the crossing and not be knocked over by the rush of people. These 2 images were taken at 1/15 sec at f/22.

This was taken in Waverly Station, again shows the busyness of the place, but I liked the effect of the woman running, presumably she was risking missing her train, and felt that this image told a strong story. This was taken at 1/20 sec at f/20.

I also experimented with images where the shutter speed was quite fast but I was moving rapidly, in this case on a train, looking out of the window. The initial images were not successful as they tending to show the dirty window rather than the view. Images just looking outside gave a good movement blur – but could have been taken anywhere, or looked as if I was not holding the camera still. The more distant part of the image below does retain relative clarity compared with the actual station, so could be worth experimenting further.

I then used my son, who was almost asleep with his head on the window, and focused on him. This gave an interesting contrast of the in-focus person inside the train compared with the intense sense of movement outside the train and I felt was the most successful of this series of images. Taken at 1/30 sec at f/5.6 the blur will have been exaggerated as I was focusing on the nearer person.